Accounts vary, but whatever you hear about Amazon’s recent members-only Prime Day event, the one certainty is that it has become a worldwide retail phenomenon generating huge buyer interest and industry attention.

Yes, there were the usual glitches:  Amazon’s website crashed early-on (quickly fixed).  Many deals weren’t all that impressive.  The impressive deals sold out too soon.  But, per Fortune Magazine (7/18/18): “Amazon says this year’s Prime Day was ‘the biggest global shopping event in Amazon history.’ …. Sales … surpassed Cyber Monday, Black Friday and 2017’s Prime Day (which itself improved upon the 2016 event by 60%).”

A key driver of Prime Day was Amazon’s massive and sophisticated email program:  1.9 billion related emails sent during the period, and almost 1,000 campaigns.  Amazon announced on July 3rd that its 2018 Prime Day would start at 3 PM on July 16th, and run through July 17th.  That announcement included a series of high-volume campaigns, most with the subject line, “Prime Day is coming on July 16. Woohoo!”  The largest such U.S. campaign went to 66 million customers, driving a 17.7% read rate.  The campaign to India had an audience of over 200 million, with a 6.2% read rate. Similar campaigns deployed to proportionally large audiences in other countries.  By Amazon standards, read rates were not uniformly strong for these initial announcements (5-25%), but their reach was extensive, considering the audience sizes. 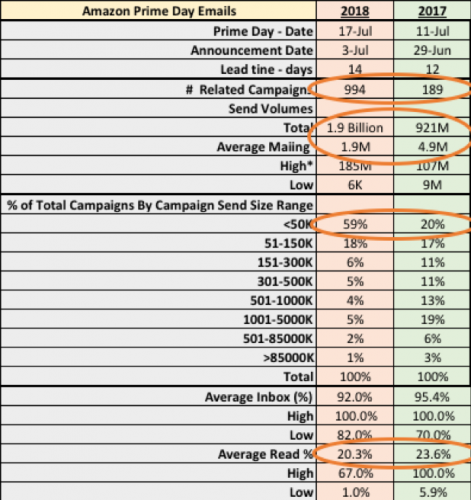 And what of Amazon’s competition?  How did they handle Prime Day?   The event is hard to ignore, but Amazon holds the advantage.  Their Prime Day start-date is closely-guarded, leaving competitors waiting — hopefully prepped — to push the “go-button” on their own event(s), with very little lead time.  The table below shows how seven major multi-channel retail brands responded with email campaigns that deployed in immediate proximity to Prime Day. More than 50% of each brand’s email audience overlaps with Amazon’s. All except Staples and Kohl’s ran somewhat themed events around Prime Day:

They all tried, but even their best read rates only came within seven percentage points of Amazon’s overall Prime Day average.  Thus is it ever.