The key social media outlets project an email footprint every bit as imposing as the activity and engagement they generate within their applications among millions of people worldwide.  And these communities have increasingly appeared within the audience overlap reporting we do for the client brands we analyze in our competitive reporting.

Most of us are also subscribed within one or more of these email audiences.  Here’s a look behind the curtain. 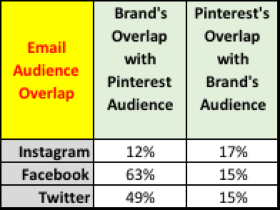 Key Takeaway:  Given these high levels of market coverage and engagement, no marketer should be without a clear and well-executed strategy to leverage the social media, both as communication channels for driving revenue, and as a means of acquiring qualified, opted-in email subscribers for their brands.  How’s your strategy doing?