“Love” is the very last feeling most of have for today’s airline experience. But Southwest Airlines has successfully built this concept into its brand, consistently making the top tier in customer satisfaction surveys. And in our client reporting, Southwest almost always appears as the top airline for email subscriber overlap with virtually every major client brand we analyze.

Data are in the table below, reflecting all email activity we detected from each brand over the past sixty days (i.e., supporting marketing and promotion, rewards, and trip cycles).  As perspective, the table also shows data on fleet size and number of destinations. 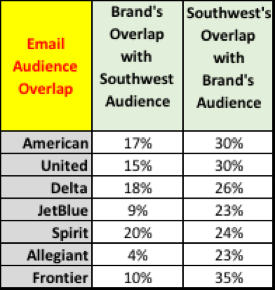 So, it appears that Southwest’s approach to email is consistent with other elements of its business model   That success of that model is embodied in a now-familiar term, “Southwest Effect,” which describes the prompt lowering of competitive prices wherever Southwest goes.  Who needs assigned seats?