The recently announced formal House impeachment inquiry has all but eclipsed attention away from the contentious roster of Democratic Presidential candidates. We’re seeing a hot email war that’s much less between those candidates than between the powerful forces representing each side of the intensifying impeachment battle. And, predictably, the battle being fought with email is much less about conflicts of principle than about leveraging those conflicts to raise money.  These campaigns peaked in the seven days ending September 30th, which is a month-end cutoff for Federally mandated political fundraising reporting. Let’s talk about what we’re seeing.

There are two main combatants in this fight:

Here’s an activity thumbnail for each, with views of the past thirty days and the past seven days:

(*) Shows the audience percentage not opening an email from that sender in the past thirty days, having previously done so, and while continuing to open emails from other senders.

DCCC has twice Trump’s audience, deployed many times the number of campaigns (though not all explicitly impeachment-themed), but had a much lower read rate than Trump’s activity, and a higher spam rate.  These differentials didn’t change appreciably between the two time windows, although the DCCC did surge much more of its 30-day volume than Trump did into the most recent seven days.  Nevertheless, the DCCC audience’s overall open-engagement is ten percentage points better than that of Trump’s audience. 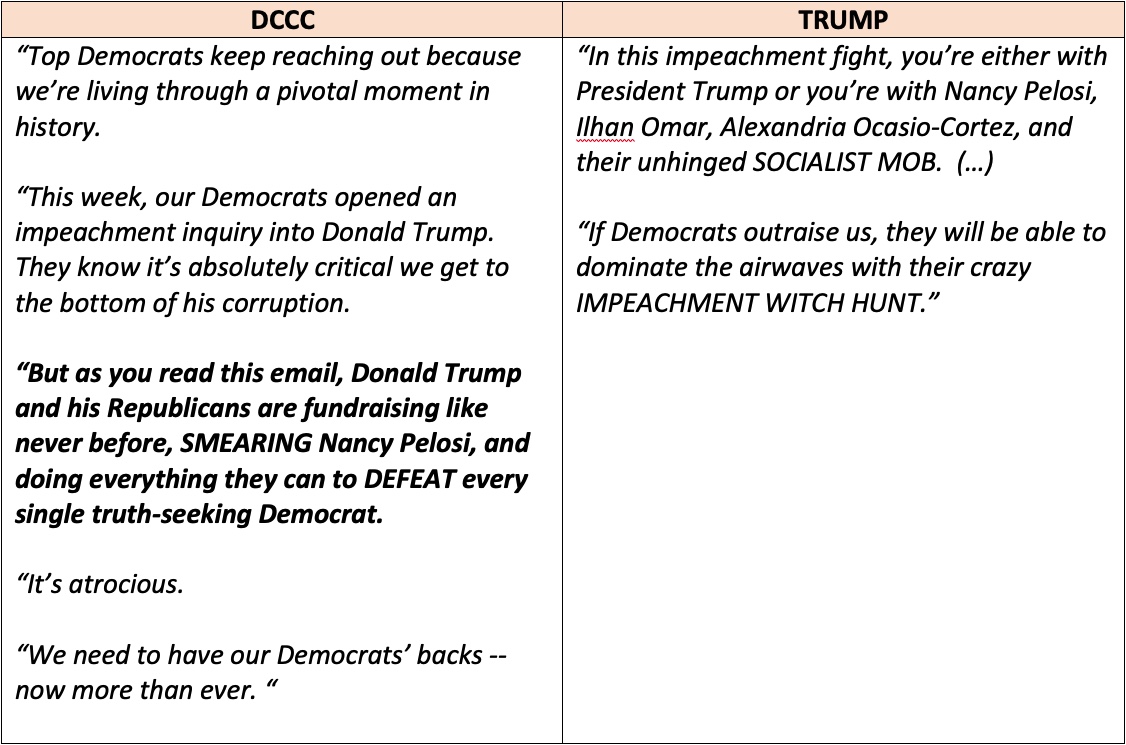 Nearly all of these messages front urgent fund-raising CTA’s.  One exception, from the DCCC, (Subj: “NOT asking for money”) in fact yielded a survey request, providing this link:

“BEFORE MIDNIGHT: Will you take a stand with me against Trump’s corruption and abuse of power? >>”

The link leads to a simple form (Heading: “Demand an End to Trump’s Corruption “), requesting email, zip code and cell phone number.  Next to the phone request was an asterisk to a footnote which includes this wording:

“By providing your phone number (home or mobile) you consent to receive periodic campaign updates through automated text messages and calls from DCCC.”

So, they’re not raising money here; rather opting-in a new point of contact — so that they can raise money.

These emails are pervasive because they do raise money, not necessarily as the sole or largest source, but with quick-turn flexibility and sufficient success to be worth their low cost.  The email is personalized to the extent that it recognizes whether its receiver has responded to earlier requests.  However, production values are consistently low, and the inflammatory tenor of the messaging, and its high frequency (e.g., 25 DCCC emails in one inbox over the past week), may be considered offensive by some, in part explaining the spam issues many of these campaigns have.

Between the impeachment battle and the Presidential campaigns, none of this activity is going away soon.  We have a fascinating window into the political process.  We’ll keep watching and reporting.