In our previous Prime Day deep-dives, we’ve focused on how Amazon has used email to support Prime Day; that is, what campaigns they deployed, when, and with what success.  That’s always been quite impressive and it has been again, so far, this year.  During their 22-day Prime Day run-up, Amazon:

Those are robust numbers for sure, but they’re also what we’ve come to expect from Amazon.

So this year, we’re focusing more on Amazon’s major retail competitors, for whom Prime Day understandably poses a serious challenge.  They can’t ignore Prime Day, but it’s hard to counter — never mind avoid mentioning — a huge competitor’s strongly branded blockbuster event, especially when its timing is usually a closely guarded secret until very close to the event itself.

But this year, things changed a bit.  Amazon’s June 22nd announcement of its 2019 Prime Day dates occurred twenty-two days in advance of the event itself (versus fourteen and twelve days, respectively in 2018 and 2017).  That’s still not a lot of lead-time in which to plan and mount a major retail promotion, but it’s adequate leeway if you already know — from four years of previous experience — the week in which Prime Day will almost certainly occur.

The larger point is that Amazon’s major competitors cannot — and most do not — ignore Prime Day.  One of the biggest aspects of the Amazon threat shows up in what we call “email subscriber overlap,” the extent to which two brands share an email audience.  We can see subscriber overlap as part of what we track from the large consumer panel supporting our Competitive Tracker data platform.  The fact is, Amazon’s email audience is so enormous that it creates powerful overlaps with virtually every major retail brand (and many others in most consumer-based industries).

Look also at this graph below, which shows Amazon overlap for eighteen major specialty and/or online retail brands.  The average Amazon overlap In this group is 58%, and one is almost 70%. 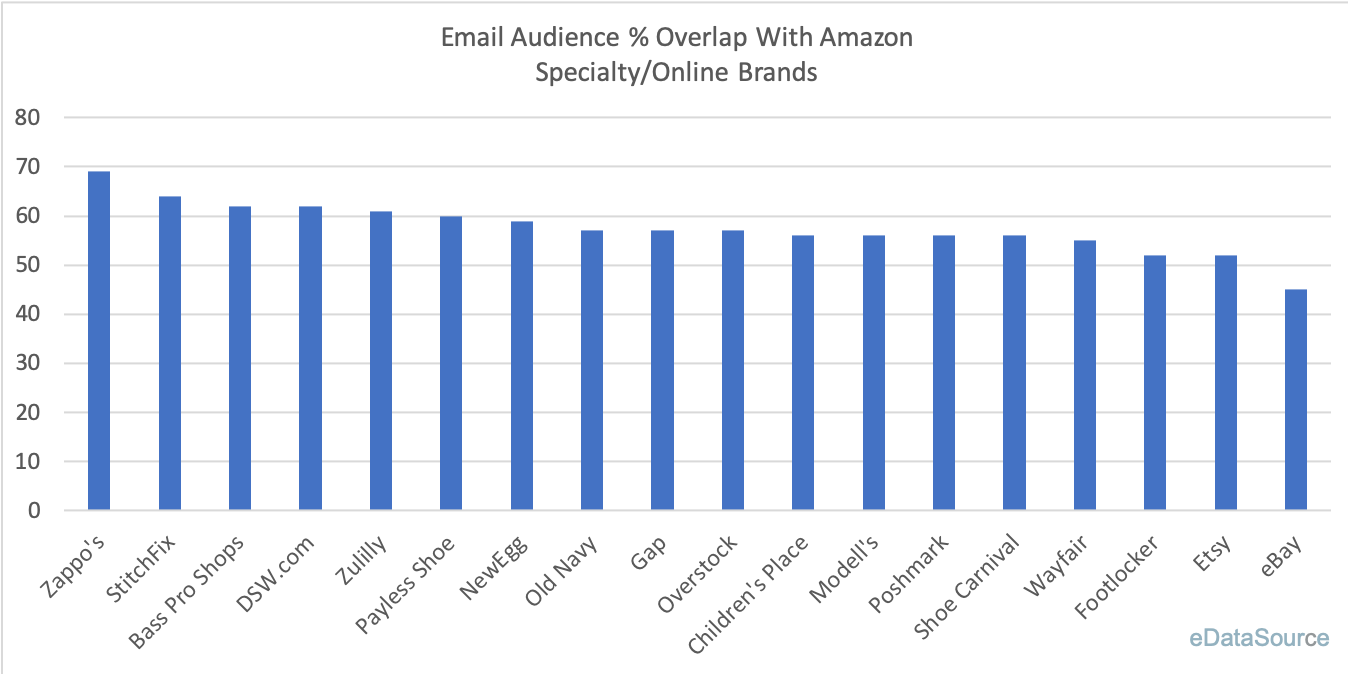 Taken together, there’s a powerful story here.  Not only is Amazon a formidable competitor in every product and service category they occupy.  They’re also —due to their best-in-class audience and message optimization — formidable competitors for attention and engagement in their customers’ email inboxes.

So, we went looking for how Amazon’s retail competitors have attempted to cope with this year’s Prime Day, and how they’ve deployed related email.  Some have, and some haven’t.  For at least Macy’s and Dick’s Sporting Goods, countervailing events appear to have been timed to began and end just before Prime Day.

Here are examples of what we saw from these brands in the two days before Prime Day.  As we’ve observed in the past, read rates for these campaigns generally underperform those of Amazon’s comparably timed Prime Day emails.

Why does this matter?  Amazon is a “perfect storm” of email best practice.  It’s hard for Amazon’s competitors to counter a promotional event with the heft and momentum of Prime Day. But because of Amazon’s powerful email subscriber overlap with other retail brands, it’s still important to observe and understand how Amazon uses email to support the Prime Day event, in terms of serving up well-timed, highly relevant content.  Amazon applies those practices year-round, and they’re critical to the success with which Amazon has engaged and retained their customers.  In a future Blogpost, we will take a closer look at Amazon’s execution of email best practice.